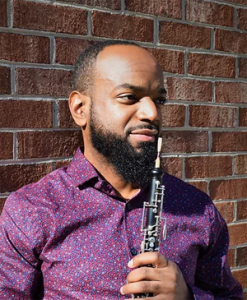 Dr. Ronnal Ford provides applied lessons to our woodwind students! Dr. Ford is the second oboist and English hornist for the Fayetteville Symphony Orchestra, a visiting professor at the University of North Carolina School of the Arts and part-time professor at North Carolina A&T State University. Additionally, he teaches at Guilford Technical Community College and Forsyth Technical Community College. He obtained his Doctor of Musical Arts degree in Oboe performance from the University of North Carolina at Greensboro and his Master of Music and Bachelor of Music degrees from the North Carolina School of the Arts, in English horn and oboe performance. Ronnal has also served as an Adjunct Professor at Winston-Salem State University, teaching applied violin, oboe and bassoon, along with Introduction to Music courses.

Ronnal began his formal oboe training at the North Carolina School of the Arts, studying with John Ellis. Ellis taught at NCSA while playing with the Hollywood Bowl Symphony and recording for many major motion pictures. Ellis’s oboe playing and reed making style became influential in Ronnal’s performance and research while studying with Dr. Ashley Barret at UNCG.

In addition to his career as an oboist and English hornist, Ronnal has broadened his performance career to become a woodwind specialist. He began to seriously study the additional instruments and has performed all over the state of North Carolina and throughout much of the East Coast in various ensembles on the additional instruments. Learning these instruments not only broadened his performance opportunities, but it afforded him the ability to understand other players’ parts better, what is difficult on certain instruments, how to aid other players when he is playing with them, and intonation problems between different instruments. Playing other instruments enabled him to perform with those instruments in ways a lot of other musicians would overlook.  Ronnal has performed with such ensembles as the Fayetteville Symphony, Winston Salem Symphony, Western Piedmont Symphony, Orchestra Noir, Piedmont Wind Symphony, Durham Symphony and the Carolina Philharmonic on various instruments.